Need help finding something? Is a program not working? Game crashing? Give us all the details you have and we'll try to sort it out!
Post Reply
5 posts • Page 1 of 1

I'm new (leech much?) in modding, cos so far, the only way I install mod are just download and place it in rePatch folder. Please bear with me.

Trying to make mod menu to work on vita. I'm following the guide to build "data.cpk" here since the link I follow here and here don't really give a hint how to build the mod.

What I've done so far by following the guide are simply decrypt the PCSE00120 from my vita using maidump and copy those file to PC, another problem is the downloaded mod doesn't seems to shown up in mod compendium list.

So if you guys have better experience with this case or simply a file that I can download and place it inside rePatch will be apreciated.

Thanks in advance!
Top

Hi, sorry for the confusion! Definitely my bad, since P4G PC came out I still haven't clearly established the differences between both versions.

Tekka, the developer of Aemulus, recently took over maintaining the Mod Menu, and since he made it use Aemulus exclusive features (table patching, bin merging...) there's no longer a Mod Compendium version in distribution.
However, simply building the mod with Aemulus and then copying the output files to the Mod Compendium as a new mod should in theory still produce a working mod.cpk for the Vita version. There's just a few things that need manual changing:

1) Take everything out of the resulting "data_e" folder after building with Aemulus and put it in the Mod Compendium as a new mod (so the path would be like Mod Compendium\Mods\Persona4Golden\Mod Menu (Vita)\Data\init_free.bin)
2) Replace the init_free.bin with the Vita one (since the PC version is different)
3) Using Amicitia, replace the field.bf in init_free.bin with the one from tha Aemulus package (found at Custom Sub Menu\data_e\init_free\field\script)
4) Also replace MSG.TBL in init_free.bin using the one from the Aemulus output, once again extract and replace using Amicitia

Everything else should be the same between both versions, so we can then build the mod one final time using the Mod Compendium.
Here's what I have so far after doing all that:

Downloads:
Mod Compendium output, ready for repatch: https://drive.google.com/file/d/1EFHMnc ... sp=sharing
Includes the eboot.bin with that patch preinstalled, as well as self_auth.bin and param.sfo in case they're needed for any reason. If it doesn't work for you I recommend removing them.
Mod Compendium package: https://drive.google.com/file/d/1G5TQd2 ... sp=sharing
This one is for building with other mods and to serve as an example. 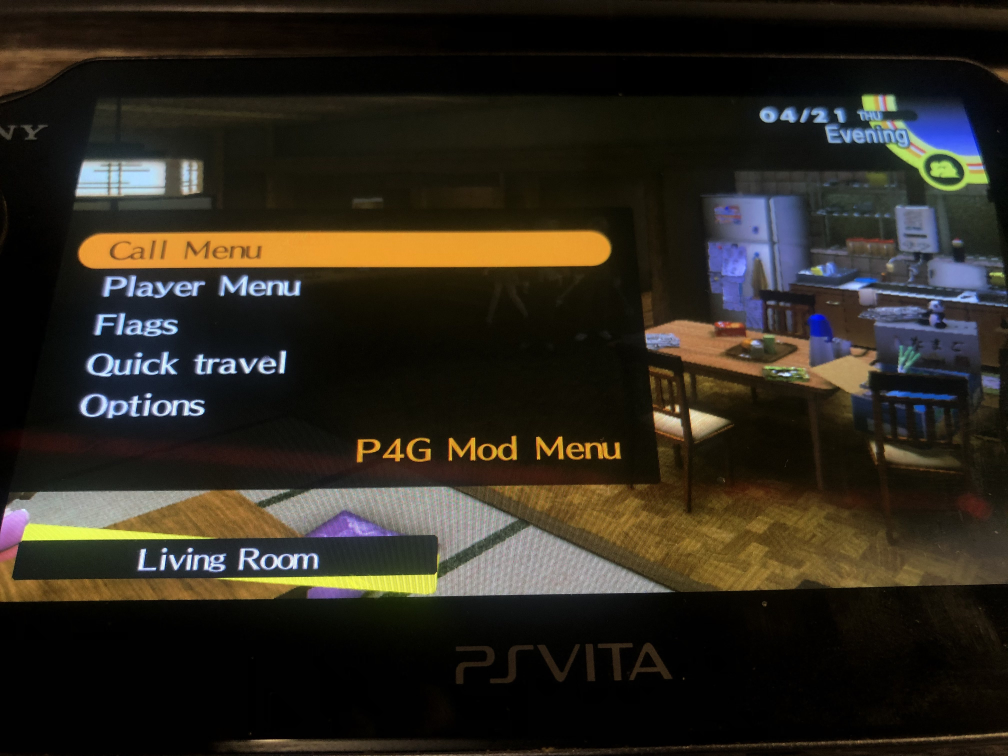 Currently it seems traversing pages with L/R doesn't work. I might have to release a fork of the project for Vita to fix that issue.

Other stuff I used:
- lipsum's mod.cpk patch (replaces eboot.bin, included with the repatch download link above)
- 0syscall6 instead of ref00d
- lman's v1.4 nonpdrm
- repatch 3.0
You can use autoplugin 2 to easily install all of these plugins if you find it more convenient.
Disclaimer: I try to respond to everything I can, but might not always have an answer to every question.
Github | Project Status
Top

Thank you so much ShrineFox-Sensei for the guide. I just downloaded the repatch ready version in the end... and it worked fine.

Will look after the forked version for the fix, again, thanks!
Top

No problem! Glad it worked out.
Here's an update to fix the page navigation: https://github.com/Amicitia/P4G-Vita-Cu ... u/releases

All future PC updates will be synced for Vita there as well. Enjoy!
Disclaimer: I try to respond to everything I can, but might not always have an answer to every question.
Github | Project Status
Top

Thanks sensei! Especially for the repatch folder.

Edit: just to inform, it crash the game when enter the dungeon, yukiko castle, dunno about other dungeon cos i started a new game.
Top
Post Reply
5 posts • Page 1 of 1