If you’re modding Persona 5 on a console with custom firmware (rather than using the RPCS3 emulator), there are extra steps required to get patch.yml modifications working. This includes mod.cpk support, 60 FPS, intro skipping, file access logging, randomized music, hiding UI elements and more.
TGEnigma has created RPCS3PatchEboot, a program that can apply these patches to your game’s EBOOT.BIN file.

The EBOOT.BIN is different between regions, as well as between physical and digital releases of the game, so unless you have the European PSN version, you’ll have to patch your own EBOOT.

Following the instructions in the video, connect to FTP and get the EBOOT.BIN from the directory your game was installed in. Transfer it to your PC.
In order to decompress/decrypt and patch your game, you WILL need:

1. Put the patch.yml in the same folder as RPCS3PatchEboot.exe.
2. Extract TrueAncestor SELF Resigner and copy your .rap to the raps folder.
3. Put the EBOOT.BIN in the same folder as resigner.exe and run it.
4. Press 1 then enter, you will get an EBOOT.ELF file.
5. Copy EBOOT.ELF to the folder with patch.yml and RPCS3PatchEboot.exe.
6. Delete anything in patch.yml you don’t want to use entirely (for instance, if you don’t want randomized music, delete the entire section of the file)
7. Open a new command prompt window and drag RPCS3PatchEboot.exe, EBOOT.ELF, and patch.yml onto the window in that order (separated by a space). Also input the path to your new EBOOT at the end, which could be anything (i.e. EBOOT_NEW.BIN)

8. Your new EBOOT should have been generated if all went well. Rename your new file back to EBOOT.ELF (delete the old one if you have to). Put it in the same folder as resigner.exe. 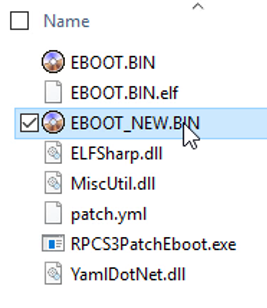 9. Run resigner.exe, type in 12 and press enter. This should create a new EBOOT.BIN using our patched EBOOT.ELF, which you can transfer back to your PS3 and hopefully run the game.

Keep in mind these instructions are for resigning EBOOTs to run on a DEX CFW, if you are using CEX you may have to follow slightly different steps.