UPDATE 1/12/2021: This guide was originally written by Cryptoss, but has been updated by ShrineFox to prevent it from becoming obsolete.

UPDATE 6/21/2021: See this guide for using Aemulus for the best experience installing and using P3FES, P4G (PC) and P5 (PS3) mods. Most new mods for those games require Aemulus and do not work with the Mod Compendium, rendering the latter half of this guide obsolete.

You can get the RPCS3 emulator from rpcs3.net. This guide is focused on how to install Persona 5 mods on PC.
See this guide for setup on a CFW PS3 console, or this guide for modding Persona 3/4 on PCSX2.

With RPCS3 installed, you also need to install any PS3 firmware via File > Install Firmware. 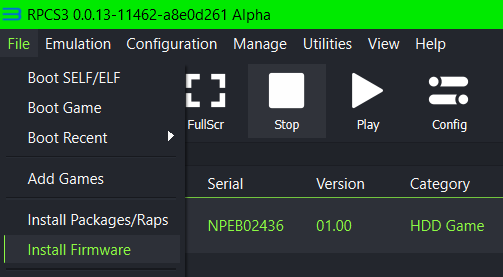 Then, also install Persona 5– sorry, we can’t help you locate that.
Installing a PKG isn’t enough, you also need a valid .RAP (license) file that goes in the RPCS3\dev_hdd0\home\00000001\exdata folder before you can boot the game.

Download the patch.yml file from shrinefox.com/PatchCreator.
Follow the instructions at the top of the page to get the proper PPU hash!
Pick any of the modifications you think you’ll use, but make sure the first one is enabled: 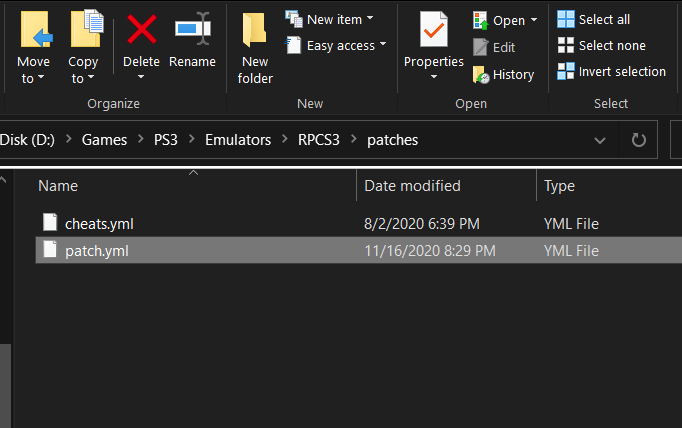 Place your downloaded patch.yml in your RPCS3\patches directory. If the folder doesn’t already exist, create it. 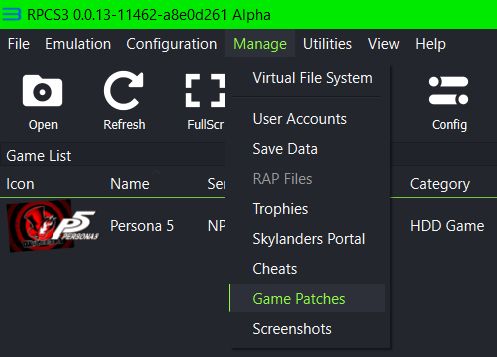 Once you’ve done that, check Manage > Game Patches in RPCS3. Enable at least the “Mod Cpk Support” under Persona 5. The other settings are optional. 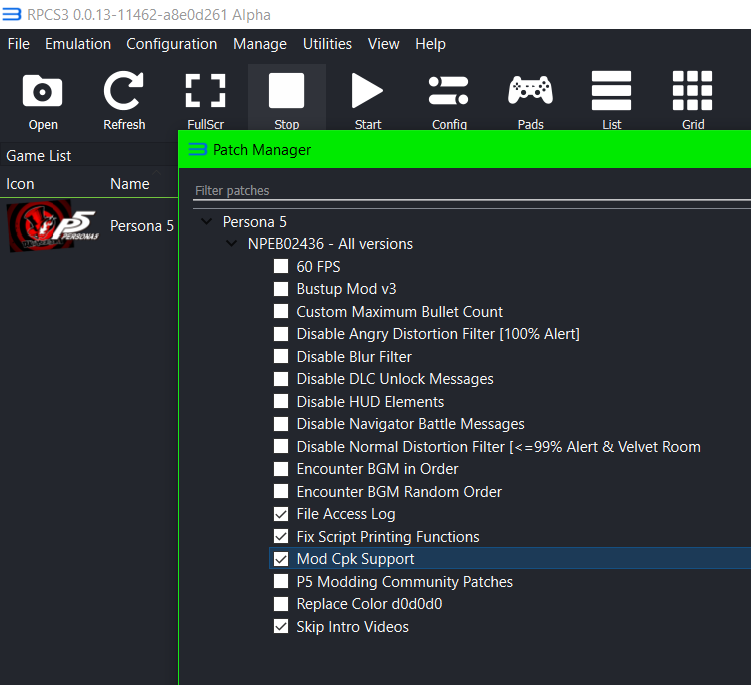 Setting Up the Mod Compendium

The Mod Compendium is a manager for creating and installing multiple mods. This application also has this capability for other Persona titles. 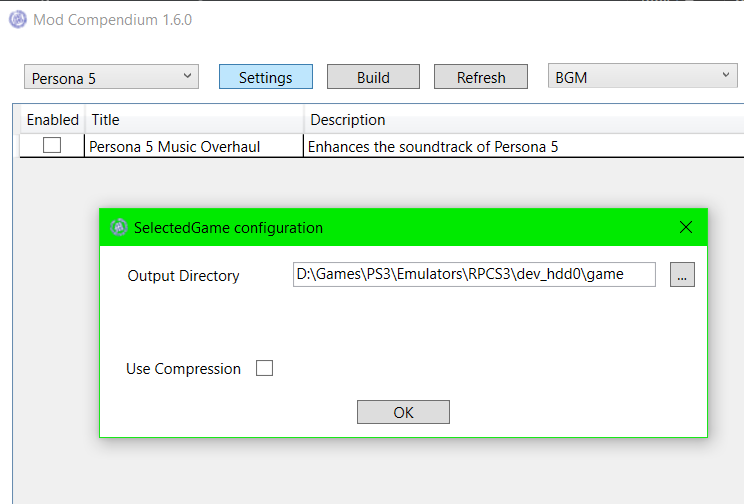 To begin, open the Mod Compendium application and ensure that the current title is set to “Persona 5” (changeable at the top left corner). Next to this will be a button titled “Settings”. Click this box, then click on the “…” right of the input box for “Output Directory”. 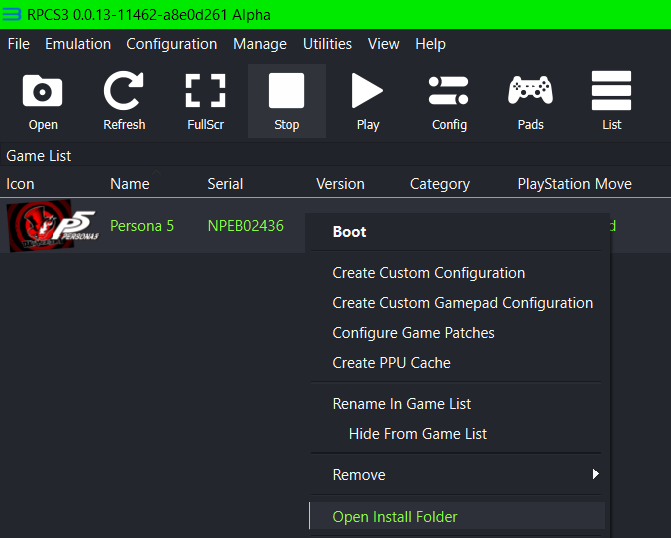 Navigate to your Persona 5 game folder by right clicking it in RPCS3 and choosing “Open Install Folder.” 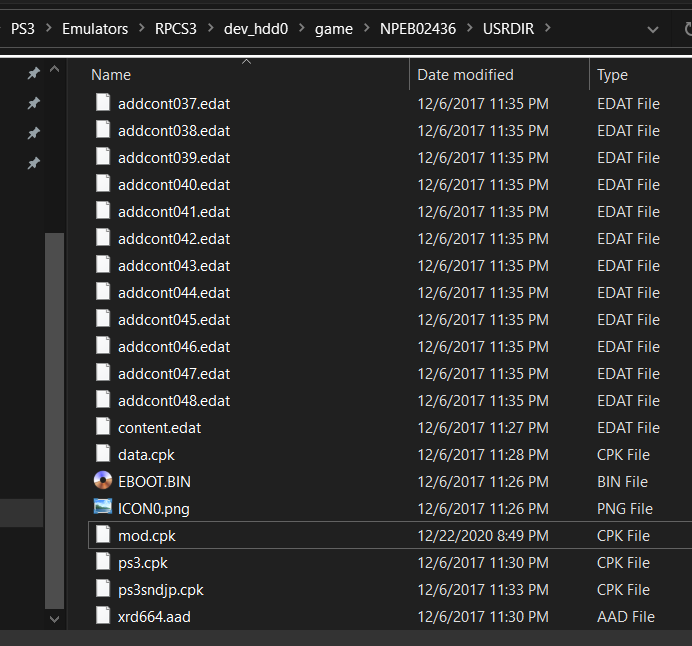 Proceed to the directory “\PS3_GAME\USRDIR”. Note that the contents may look different for you than the above image.

Copy the path from the address bar at the top of the Windows Explorer window and paste it into the Mod Compendium. Select “OK” to finalize settings.

You have now completed the Mod Compendium setup.

The mod installation process is simple and works with any mod available at amicitia.github.io. 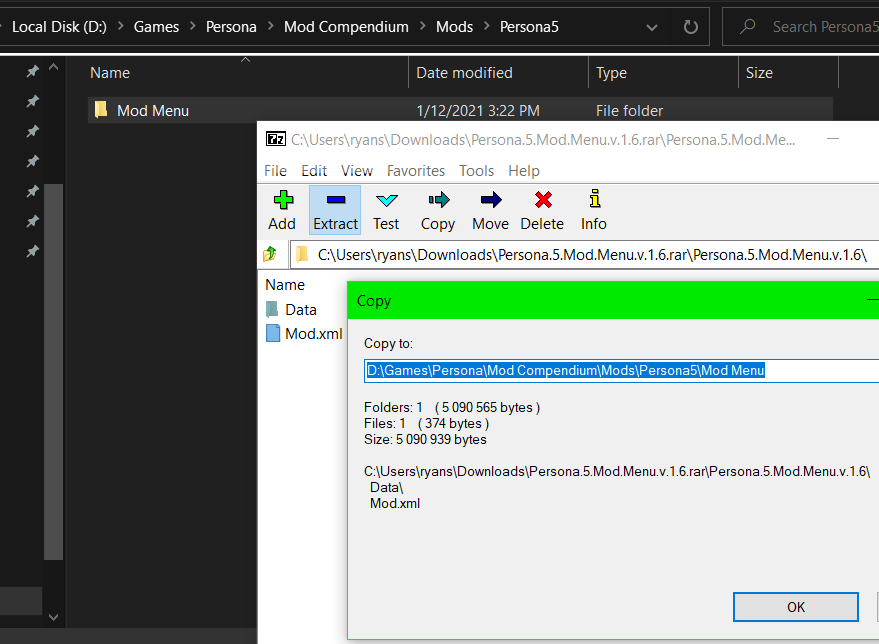 If your downloaded mod file hasn’t already been unzipped, it will end with the .zip, .rar, or .7z extension. Unzip it.
If your computer is unable to do this by right clicking on the file and selecting “Extract”, download and install 7zip.

The “Data” folder and “Mod.xml” file should be in their own folder named after the mod inside the Mod Compendium\Mods\Persona 5\ folder. If any of those don’t already exist, create them. 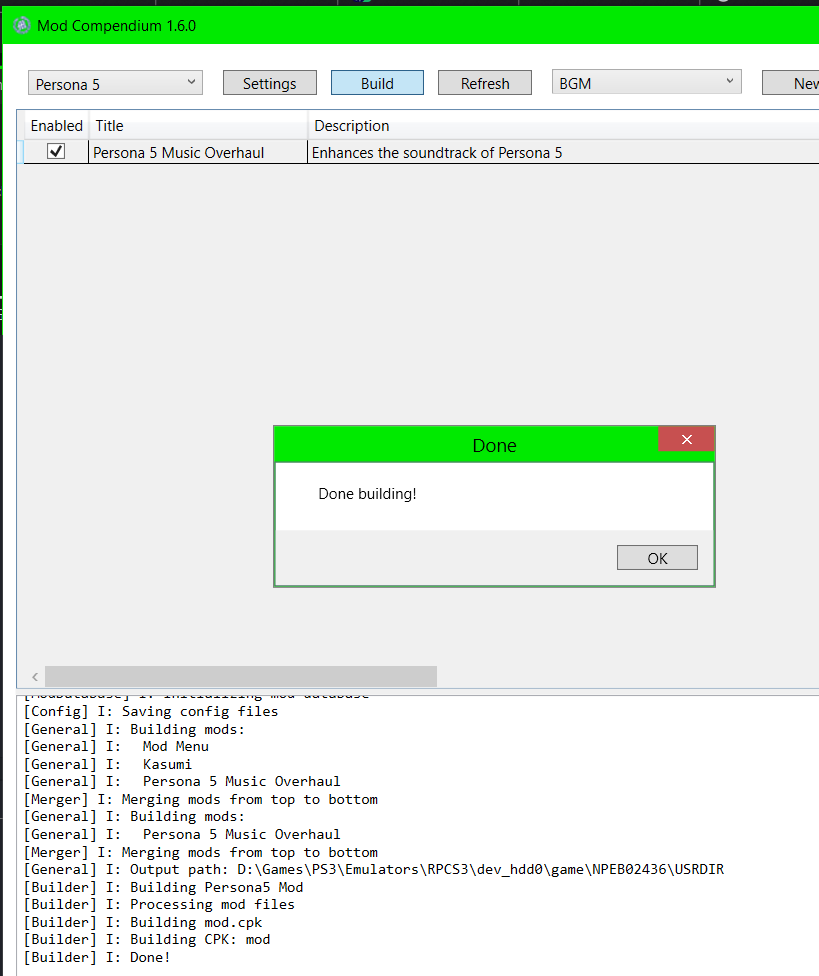 Click the mod’s checkbox on the left side of the screen under the column titled “Enabled”, then click on the button titled “Build” located at the top of the Mod Compendium. Wait until a box appears telling you that it’s done building.

If you’ve configured the output directory correctly and enabled mod support in RPCS3 using patch.yml, the mod should be active next time you launch the game!
To disable a mod, simply click “Build” again without its checkbox enabled. To disable all mods, delete the “mod.cpk” file from P5’s \PS3_GAME\USRDIR\ directory.

Note: if you are using multiple mods, there is a chance that the enabled mods will conflict with one another. The Mod Compendium’s load order prioritizes the highest mod(s) first, so you may have to adjust the load order by right clicking on a mod and selecting “Move Up” or “Move Down”.
This may remove some remove features of the mod that is placed lower in the Mod Compendium (for instance, if both mods replace the name of a persona, even if it isn’t the same persona, only the higher prioritized mod’s name edit will show in-game. )

For more help installing mods with the Mod Compendium, see the video below.

The next guide will show you how to extract game files to create your own Persona 5 mods.