Share, discover, or contribute to mods for Persona 4 Golden for the PSVita and PC.
Post Reply
6 posts • Page 1 of 1 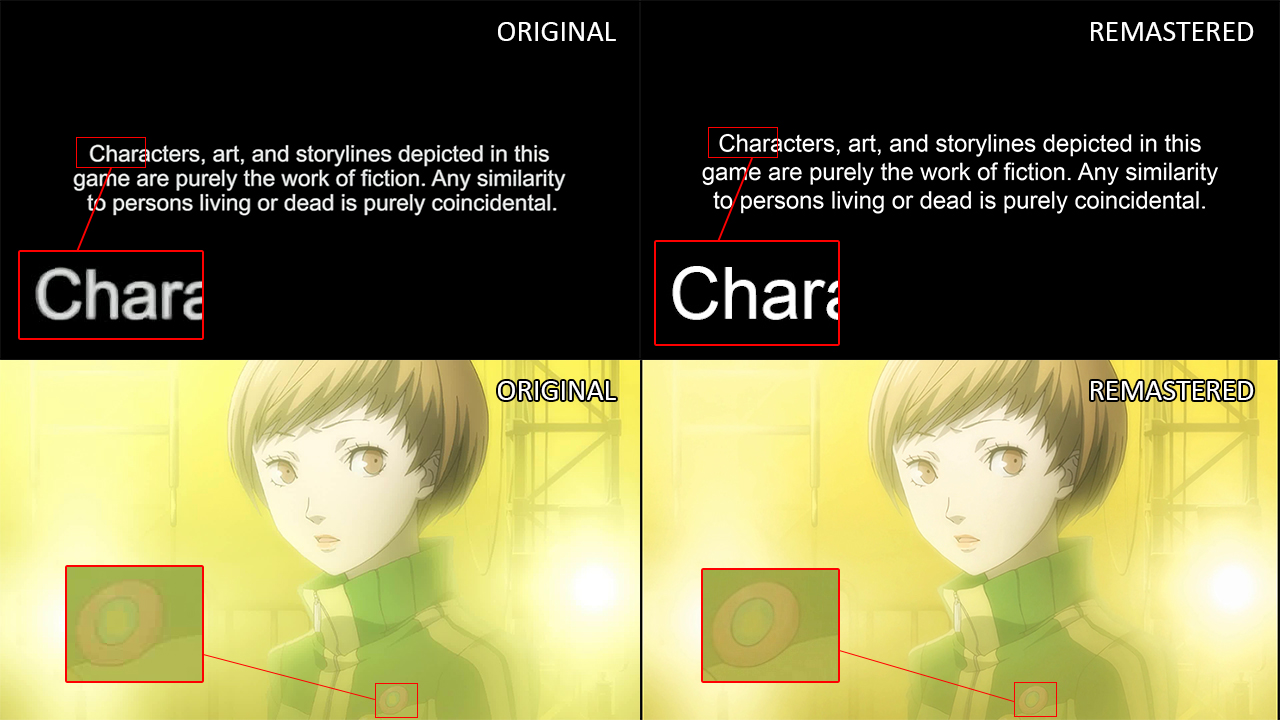 INTRODUCTION
I think it's fair to say that the quality of cutscenes/FMVs in the PC port of P4G have been a disappointment for fans.
This mod aims to provide an improved visual experience.

CHANGELOG
Spoiler
Show
[3rd September 2020] Stable release (v1.5)
- Re-encoded to work with the latest version of Persona 4 Golden on Steam, Version 1.1 (REV 2033).
- Further reductions to stuttering thanks to better support for wmv3 in REV 2033.
- "Large Address Aware Patch" has been removed from the "Requirements" section of my installation instructions since the issue this fixed has been resolved in REV 2033.

In this new update, Atlus have added a setting to toggle low quality cutscenes for people who are continuing to have performance issues. These "new" low quality files are literally just the original Vita cutscenes encoded to WMV... My pack doesn't touch these files, but if people are interested in my own take on a low quality pack for this setting, perhaps I can include one in a later update. Let me know.

Those of you who are still on a previous version of the game (including the Denuvo-free version) can find the old version of this mod in the "ARCHIVE (v1.1 - REV 2008)" zip.

[11th July 2020] Initial beta release
KNOWN ISSUES
Spoiler
Show
- The opening movie "Shadow World" is not yet included in this mod (p4ctop3, p4ctop3_e). This is because the version already in the game is actually higher quality than the test files I have been able to upscale from the Vita versions so far. In particular, the first 10 seconds of the Vita version's video (the zoom in part) have a lot of noise/artifacting even after upscaling and more testing needs to be done.

- Colours in my .usm files are slightly inaccurate. This is most noticeable when comparing the red on Teddie in my files to those in the original video files. I suspect this is a pixel format issue. Metadata says the original files are YUV420 but this appears to get changed/messed up when the files are run through ffmpeg or Adobe Premiere. Need to investigate further.

My installation steps assume you have used both of these mod tools before. If you have not, please read both TGEnigma's "readme" and MadMax1960's "Beginner's Guide to Modding Persona 4 Golden" before you try using my files.

RECOMMENDED
- "Show Console" option DISABLED in Reloaded-II (Mod Loader Settings -> Untick "Show Console" box)
- If playing on a PC with two GPUs (integrated and dedicated, e.g. Intel UHD Graphics and NVIDIA GeForce together), which is a common configuration in laptops, make sure you're using your more powerful, dedicated GPU for playing Persona 4 Golden. NVIDIA users can configure this in "NVIDIA Control Panel".
- This may be a placebo, but I also have "Power management mode" set to "Prefer maximum performance", which seems to help with stuttering. 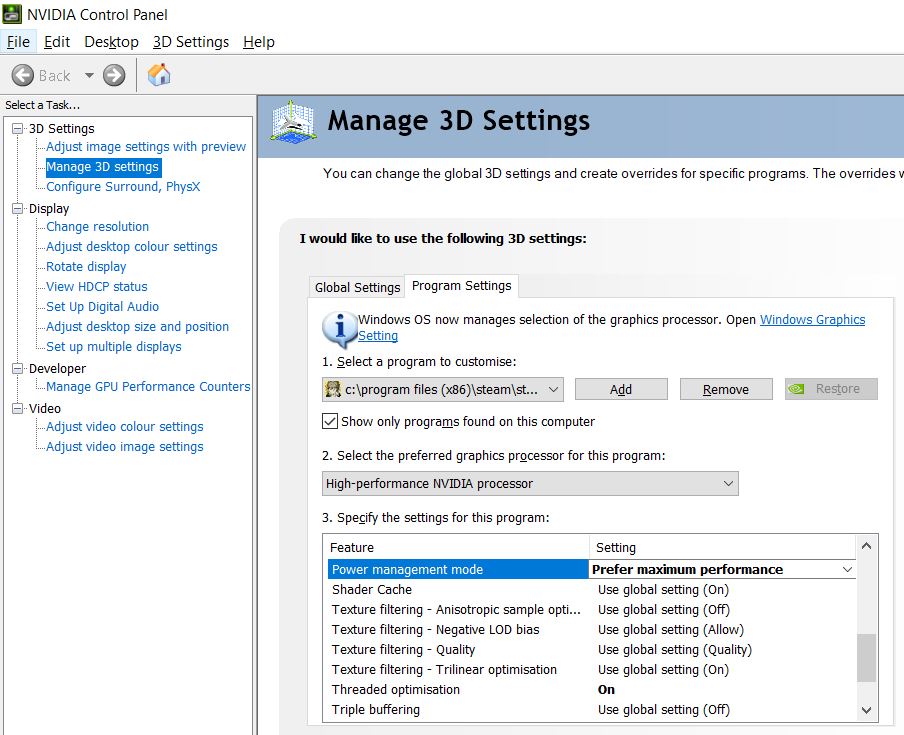 INSTALLATION
NOTE: This mod was created for and tested on the latest stable Steam version of the game. I do not support beta versions of the game.
FAQ
"Will there be a 4K version?"
- I have actually created some sample 4K files, but they don't appear to work correctly in-game. Despite the files playing just fine in VLC/MPV, there was a lot of distortion and flickering in-game and the video didn't scale correctly to my monitor's resolution (1920x1080). Also in my experience, upscaling the Vita files to 4K+ increased the likelihood of glitches/distorted frames appearing during the rendering process. I can't imagine I'll be working on a 4K version of this mod anytime soon, but if you play the game at 4K and have a 4K monitor to test with, drop me a message. Perhaps we can do some testing and revisit this when I get the time.

"Why are there thin black bars on either side of the video?"
- The Vita cutscenes' original resolution is 960x544. Scaled by two you get 1920x1088. I didn't want to crop or stretch the image like Atlus have decided to, giving us a cropped or distorted image. I want an accurate image. So instead, I scaled the video to fit a 1920x1080 frame, retaining the original aspect ratio, but resulting in the 4 pixel-wide black bars either side.

"Do you recommend any other mods to compliment this pack?"
- See Pixelguin's P4G PC Fixes + Quality-of-Life Mod Directory

CREDITS
TGEnigma for p4gpc.modloader
Sewer56 for The Reloaded Project, Reloaded-II
PelvisBass for their time and advice
LordCheesusCrust for their help getting the Vita files decrypted
tbmg12345 for their upscaling assistance
ShrineFox and all the contributors for the very helpful Amicitia Wiki and Forum
Last edited by rudiger__sf on Thu Sep 03, 2020 7:14 am, edited 9 times in total.
Top

Yeah, it caused more issues for me than it fixed to I switched back to the initial release. That and it didn't play well with most of the mods/loaders we have in place
Top

Thanks for testing. I learned just yesterday that although it's not in the release notes for the branch, ATLUS have fixed the "large address aware" issue in Hotfix_01a, so the manual patch is not necessary for that version. I've updated the OP too so people are aware.

NEW UPDATE
[3rd September 2020] Stable release (v1.5)
- Re-encoded to work with the latest version of Persona 4 Golden on Steam, Version 1.1 (REV 2033).
- Further reductions to stuttering thanks to better support for wmv3 in REV 2033.
- "Large Address Aware Patch" has been removed from the "Requirements" section of my installation instructions since the issue this fixed has been resolved in REV 2033.
Top
Post Reply
6 posts • Page 1 of 1