One of the hardest things in making Mipha’s Grace stand out is custom outfits. I’m not talking about actually modeling them or rigging but rather the entire concept itself. Because Mipha has a non-standard body type being a Zora; it’s hard to get a good color scheme going due to the red tone and her shorter bow-shaped legs. The lovely AmberClover has been kind enough to whip up some fantastic designs that I hope to include in the future. As modeling is my weakest point right now this may take awhile but this art is the foundation I hope to build upon. Thank you so much for all this art! 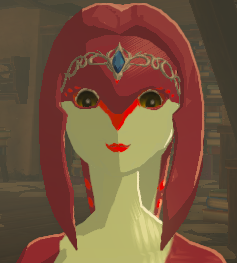 About the Mipha’s Grace Mod

I started this add-on project after messing around with the Playable Mipha mod about two winters ago. I kept thinking to myself “this is great that I can finally play as her but I wish there could be a more immersive experience.” This blogpost is going to document the progress as I stumble around tweaking the little things in BOTW that make the full experience. Before this project I had zero modding experience so if anything I hope all this is inspiring to others who might feel intimidated by the process.

Mipha’s Grace started out as pure text edits and grew from there. I wanted to mention some of the older tools that aren’t in use anymore but were fundamental in getting the edits off the ground.

MSBT Editor Reloaded – The first draft of edits were done in this program and I actually find it still in use when doing event edits due to the ease of readability. However this quickly became outdated due to the difficulty in editing the text boxes to look correct and the controls for line breaks and other uses not being in a plain text format.

Wexos’s Toolbox – Allowed the files to be inserted into the game. Outdated due to Switch Toolbox being tailored better with the file formatting.

As for current tools, I will mention them as I show them off in use.

So what is in this mod anyways?

The mod uses The Princess Zelda text edits made by Wolvatron. This saved a lot of time with gender pronouns out of the way and without it I don’t know if I could have learned the basics without being overwhelmed, a big thanks to them for allowing me to use it. For those playing the mod, there may still be old references I haven’t fixed yet (whoops!). As the modding tools have grown my own edits are differing more and more from this version.

Perhaps the most exciting of the edits and what causes the most unintended side effects. BOTW uses two types of events Event Flow and Timeline. Without going into detail here, only at this time can Event Flow events can be directly edited. This is how the cutscene with Mipha’s ghost was removed and the custom terminal text was inserted.

To give some more personality to the mod I’ve included two other mods I made, Aged up Finley and Thirsty Bozai (I’ll let that mod speak for itself).

Outside of Shrine Fox’s work I’ve deleted Mipha’s ghost from both the Champion Abilities and cut scenes that include her (more on this later). One of the updates I hope to get rid of the ghost particles.

I plan on refining the text edits as I have the wonderful Andremoi kind enough to dig into the many mistakes I’ve made over time. A lot of them still need to be fixed!

The next post I plan to do will involve switching the order you obtain the Lightscale Trident and Zora Armor. I’ll walk through the process of using the event editor and MSYT TOOLS.

Tying into the armor edits, there are plans to add in a side quest along with the Ruta quests to obtain the Rubber Armor to proceed with the fight.

Stay tuned for more in the future!

This series of blog posts is intended to delve deep into the development process, starting from scratch and leading to the next release of the mod. If you want to see what it’s like to mod BotW, how to get started, and how to master all the techniques that made a mod like this possible, you’ve come to the right place.

In October 2018, I released a mod for The Legend of Zelda: Breath of the Wild that replaces Link with another one of the five champions: Mipha. This latest update was for the Switch, but a Wii U version exists as well.

The mod features a full replacement of Link’s default armor set (plus a jewelry set, at least on Wii U for now). Notable features include the Lightscale Trident being made unbreakable (except when thrown), the paraglider redesign, the ability to swim much faster and without stamina usage, climb waterfalls and spin attack without the Zora Armor, and even the ability to enter Gerudo Town without a specific outfit.

These changes would be impossible without the Zelda BotW modding community, particularly KillzXGaming who fully reverse engineered the BFRES model format for Wii U and Switch! His program Switch Toolbox is an invaluable part of the development process.

Community member Peregrine also kindly contributed additional changes to go along with the mod, such as Mipha’s Grace Events (text edits and event flow modifications). Pronouns, references to Link being a Hylian, and even Zora reactions to Mipha’s return are all among the changes.

The Future of the Mod

Peregrine is still working on events, focusing on the Wii U version for now. My current goal is to update both the Wii U and Switch versions of the base mod to be identical, with a few extra features to make it more interesting, immersive and accurate. For instance:

The Zora people sought out a Hylian in BotW in order to deactivate Vah Ruta using Shock Arrows. As most players are aware, this is due to their innate weakness to electricity. Integrating that with the Mipha mod by increasing Link’s damage from electric attacks (to the point that it’s instantly lethal) is coming in the next update.

In the original release of the Mipha mod, Link’s skeleton is unmodified– the Mipha model was instead stretched to match Link’s proportions in order to use his animations as the player model. While I don’t think it looks too weird, several users have noted the long legs and masculine shoulders. Future installments will use Mipha’s original proportions by matching the bone positions to Mipha’s original NPC model, so that it can be imported directly with minimal changes to the original skinning.

This method isn’t without its own challenges, which we’ll discuss in the next blog post about models.

It’s possible to reuse animations from other NPCs throughout the world of BotW on Link’s model by editing his actor properties. We’ll get into that more later, but the next addition to the mod will include a more feminine walk cycle.

No Slipping in the Rain

Perhaps a minor change, but one that I think fits well with the amphibious nature of the Zoras, while also addressing a very common player complaint: climbing during rainstorms. I don’t think anybody who’s replaying the game with this mod will miss being unable to climb. No more stamina loss from slipping, and for that matter no more slipping either! Expect that in the next update.

Two new features coming to the BotW Mipha mod:
1. She now has better grip than Link and doesn't slip when climbing wet surfaces!
2. Shock arrows, lightning, and electricity in general are instantly lethal to Zoras, and Mipha is no longer an exception.

Also check out that glitch pic.twitter.com/lF1YlPaW0e

Since the next release of this mod will be on both Wii U and BotW, I’ll have to differentiate the steps between each version of the game. Fortunately, aside from emulation (and the endianness of file formats), it’s mostly identical. Switch Toolbox also automatically handles endianness differences, so the real difference is just how you run the game.

Downloading the latest Cemu allows us to run Wii U games that have been downloaded and decrypted. I can’t help much with that part for obvious legal reasons, but you can look up plenty of resources on how to obtain a dump or dump your own game.

Cemuhook is an optional modification for Cemu that can potentially increase performance by adding/replacing a couple dll files. I can recommend using it, especially on a mid-to-high-end machine.

Shader Caches for BotW can help improve performance while playing, but increase the load time each time you start the game. That said, it’s not a bad idea to start from scratch and play within a small area, bearing with the load times as it compiles during gameplay for the first time. You’ll be restarting the game to test changes frequently.

BCML is a mod manager for Cemu specifically made to merge BotW mods. It uses the Graphics Pack integration of Cemu to load mods within the emulator. Best of all, it can automatically manage the RSTB (Resource Table) of the game– which is the primary cause of crashes from replacing files with bigger ones.

While Yuzu (a Switch emulator) is in active development, you need to dump a number of things from a vulnerable Switch console in order to run it. That said, you may as well use the Switch itself to test mods using Atmosphere’s LayeredFS feature.

First, download AtlaxNX’s latest release of Kosmos. This has everything you need to drop on your SD card in order to use Atmosphere CFW. To use CFW on a compatible Switch, insert the SD card, enter RCM mode (I recommend using a specially made jig), and use TegraRCMSmash to launch the payload (the .bin file that comes with Kosmos).

On your SD card, changed files can be dropped in \atmosphere\titles\01007EF00011E000\romfs, mimicking the original file structure. They will automatically be loaded when the game runs normally. For instance, a modified TitleBG.pack would go in …\romfs\Pack\TitleBG.pack.

And… That’s it! If you need more details, the BotW Modding Community has a wonderful Discord server, as well as several other tutorials. The rest of the tools you need for specific things (like model editing) will be outlined in later posts.

This will be the home of my development updates on various projects. Persona modding guides and news will remain separate blogs, as the progress detailed here won’t necessarily be related to Amicitia. Please check back later when it’s ready!